One of the casualties of cleaning and tightening up Fate of Vimary was I decided to get rid of the expanded Contacts rules that I had come up with. I’m preserving them here in case I (or anyone else) ever does want to use them.

Contacts  represent a web of separate but overlapping groups called circles (similar to circles in the Burning Wheel or even Google+). When you purchase ranks in Contacts you choose a number of circles and place them in a pyramid. The circle can be anywhere from an individual to an entire nation. Each tier of this pyramid has a rank, which corresponds to how close this particular circle is to you. The top tier is the group that you have the closest ties to. The middle tier is one degree removed and the last tier is one more degree removed. Any Contact outside of these circles is rated at a 4. 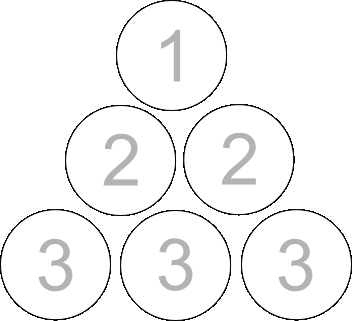 Each circle placed in the pyramid also has a size rating. There is no restriction on which size groups can be placed in which circles either based on tier or on Contacts rating. You can place an entire city as your tier 1 Contact even if you have only one rank in Contacts. This means you have a small amount of influence over a large group. As you will see below it will be very difficult to get those Contacts to do anything, but it will be big when you do.

The size ratings are as follows:

When you make a Contacts roll, you choose a target Circle for the roll. The base difficulty for any overcome or create advantage roll related to this Circle is equal to the tier rank the Circle is in plus the Circle’s size rating.

Circle placement within the tiers are fluid as groups react to the character’s social standing.. Consequences from social stress can target the pyramid, thus removing the circle from the appropriate tier. A tier 3 circle can be removed by a mild consequence; a tier 2 circle can be removed by a moderate consequence; and a tier 1 circle by a severe consequence. The circle being targeted for removal depends on the social situation. For example, if you side with the Lightbringers over the Herites during a Rant you may find yourself in social conflict with the Herites as they try to discredit you. Having a Herite cell in your circles could mean that if you take a consequence, it would be Lost Respect of Fatima’s Blood Cell and you would have to remove that group from your circles. Once the consequence is cleared you may choose to fill the empty circle with a new group provided it can be justified. Circles can also be rearranged or replaced are during milestones.