Skip to content
Today isn’t a Tribe 8 specific post, just more post apocalyptic in general. It’s also not going to be too long. A lot of times when I’m thinking of post apocalyptic locations, I try to reimagine what we consider everyday things around us with a different perspective. That’s how we get buzzsaws as polearm blades, stop signs worked into a set of armor, communities forming in subway tunnels, using sports arenas for trading outposts or forts, etc.
And then there are locations that do the work of feeling unique and fantastic all by themselves: 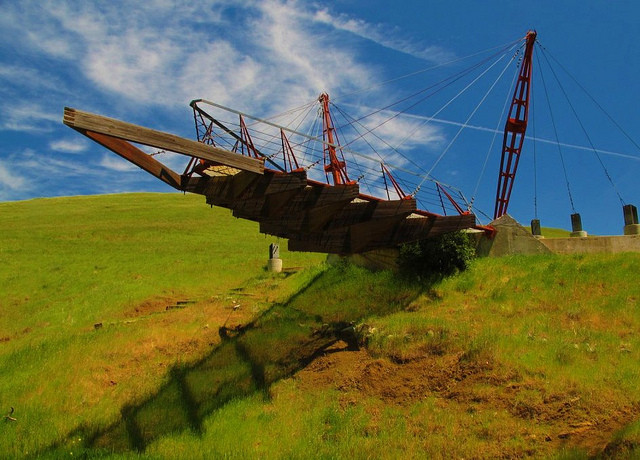 Recently I visited Cal Poly San Luis Obispo and went on a little hike up to Cal Poly Canyon, which is the home of the “Architecture Graveyard”. It’s where the architecture and design students build their

yearly projects, and while I knew that it had some cool structures I didn’t realize how cool. The first thing that I thought when I saw the structures was I had stumbled into some kind of post-apocalyptic village. I could  totally see some post-apocalyptic group coming to the canyon and seeing a place to build a settlement, using the existing structures as the foundation.
At the end of the trail leading to the Graveyard are a couple of structures, as well as corrals for horses. There’s fresh water relatively close by, but it also wouldn’t be hard to conceive that a stream might run through the area. There are also cattle in the immediate area, and nearby are greenhouses and crops that could be relocated if desired. This is the perfect setup for a little post-apocalyptic community. Structures like these could also be used as inspiration for standalone locations, not just postapocalypse but science fiction or fantasy as well.

Atlas Obscura actually has a nice page for the graveyard with a gallery of some of the structures.