Few things can get the Cortex Discord buzzing more than contests. Usually, these discussions revolve around a couple of sticking points:

People have different expectations of “high” or “low” stakes. It seems logical, for example, that a debate between two characters is low stakes while a fight to the death is high stakes. You’re not going to wind up dead in a debate (usually).

But losing a high stakes contest and being taken out doesn’t necessarily mean “dead”. It just means you can no longer participate meaningfully in the scene. For example, losing a contest with the hard-nosed maître d' at a restaurant is high stakes if it means you can’t continue in the scene. Even if death is potentially on the line, a duel between two characters might similarly be low stakes. This is especially true if it’s the climax of a character arc or other event, where a single contest and being taken out by losing won’t do it justice.

One way to sidestep this is to not deal with setting stakes. Contests always work like they are high or low stakes. Tales of Xadia does precisely this. All contests are low stakes, resulting in stress if one side fails to beat the other’s roll. It’s a simple solution that addresses the other sticky points we’ll get to below—what happens when you lose.

The second component of contests that raises questions is the wording around giving in and losing and what “get what you want” means. It comes mainly from this paragraph in the Cortex Plus Game Handbook:

Once again, Cam Banks comes to the rescue (it’s almost as if he has intimate knowledge of the vagarities of Cortex). He suggests the contests shouldn’t necessarily be about winning—it’s to get the other side to give in. People don’t like to be uncomfortable, and that’s what losing a contest means since you get a complication (or stress). When someone gives in, they say, “Fine, whatever,” and hand you what you wanted without suffering a mechanical consequence. If they don’t give in, you win the contest but you still can’t make the character do something they don’t want to. They just get a complication. Sure, once a complication has taken them out, you might be able to just take what you want—but that’s not the same thing as winning a contest.

Unfortunately, none of this is spelled out clearly in the Handbook. The word is that it will be clarified in the upcoming Cortex Codex. On the other hand, Tales of Xadia does address how when someone sticks out a contest until they lose, all that happens is they get worn down a little bit more (emphasis mine):

Contests go back and forth until one side gives in or fails to beat the difficulty. The losing side takes stress, and the winning side comes out with the advantage. It returns to a conversation—is the loser going to back down, or is the winner going to press their advantage? If the winner isn’t given what they want from the loser, another contest might be necessary.

That clarification alone makes a world of difference over “if they win, they get what they want". Defining character goals and framing contests becomes less of a minefield around player agency issues. Plus, not having to decide whether a contest is low or high stakes makes things easier overall.

But When Is It A Contest?

Another question comes up nearly as often as questions about contest goals or stakes: when do I use a contest? That’s its own subject, and I need something to get people to come back and keep reading.

For now, I’ll just leave you with these handy principles to remember: 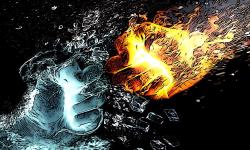