Recently I was reminded of “beat charts”. They were introduced in the Dream Park RPG from R. Talsorian Games and included in Cyberpunk RED. You can read about them more and download a PDF of the original chapter here. I used them extensively until I stopped trying to script out sessions. They help with pacing a game, but there are some warts and ways they can be improved from an RPG perspective.

As a disclaimer, I’m not a screenwriter…this is all from a layperson’s perspective.

Let’s Get This Out of the Way First

The section presented in the Dream Park RPG is titled: Scripting the Game. That’s not what we actually want to do. Beat charts in movies or video games are about defining the path that the story takes. That’s the polar opposite of what a tabletop roleplaying game is to me; I don’t script anything. However, that doesn’t mean that beats aren’t a helpful tool, even for fiction first games or games where you are playing to find out what happens.

This is probably self-evident, but any technique or method cribbed from another medium—pacing mechanisms, plot devices, types of scenes, story patterns, whatever—must be adapted to the roleplaying medium. Of course, some may work “as is” better than others. Still, in every case, they should be adjusted to account for the fact that the players are creating the story versus simply following it.

What are Beats Anyway?

Story beats are the basic building blocks of a story, representing a change in the narrative flow or the action. This is different than an acting or dialogue beat that one might find in a script. They’re typically a single scene, but not always. An example is a scene where a character searches their boss' apartment to look for evidence of a conspiracy. The beat begins when they enter the apartment and begin their search. The next beat is when they realize their boss is returning home early, forcing them to cover their tracks and make an escape. But beats aren’t necessarily any set amount of time. When you zoom in, the beats may be much smaller (such as an individual action). Zoomed out, they could be longer.

The Anatomy of a Beat

A beat should have a few things to give the GM and players what they need to play through it. There’s no need to spend any time on these questions. You likely already know the answers; if not, a short phrase is more than enough.

Once you know the answers to those questions, you’re pretty much set to be able to play through the beat.

Scripting the Game includes a good list of beats, but they were written almost thirty years ago. Like most things, the techniques of using beats are an evolving process. I have, for example, heard of Save the Cat!, but I have no idea if their framework is suitable. My guess would be not really since aggressive scene framing or plot structure techniques don’t work for RPGs.

For a great list of general beats that might work better, Robin Laws identifies nine in Hamlet’s Hit Points. I’ll list them but won’t go into details (I do highly recommend the book):

These can be roughly divided into action or drama beats, similar to how Scripting the Game presents its list of beats. Then, on another axis, beats either build up tension, or reveal information or provide insights into the characters.

We Got the Beat

Armed with just those and the questions outlined above, it becomes possible to gauge the pacing of even a “play to find out what happens” game. You can alternate between drama and action, and the ups and downs, creating a narrative flow that builds on the previous beats. It takes practice—I certainly don’t have it down.

Story beats are an excellent tool to put on your GM utility belt. It might be cool to have a set of cards with various example beats formatted with question prompts like the above. I may just take a crack at something like that.

There are some other great places to look for ideas on building blocks for game sessions or scenarios. Most of them aren’t beats explicitly, but they can be used with story beats in many cases with little effort. 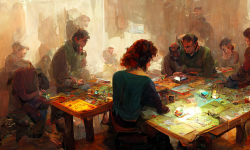