It was suggested that it might be helpful to give an example of using story beats in a game. I have to admit, I’ve not really thought too horribly much about my own process, and it’s not visible much during gameplay. Part of this is due to not really doing a lot of prep anyway—I suppose I’ve internalized a lot of it. But luckily I do have a real-life example where I have done more extensive prep that I can use as an example.

Dead of Winter was a Cortex Prime Tribe 8 scenario I ran several times. It went through a few iterations, but the structure has remained roughly the same. The premise is that the PCs are approached by someone who wants them to kill a creature and retrieve an organ they need for their research. They had tried to get it themselves but were injured, but they succeeded in trapping the creature. It was a pretty simple fetch quest with a bit of a twist. When I wrote this, I think about four years ago, I hadn’t yet read Hamlet’s Hit Points. But I was aware of Justin Alexander’s node-based scenario design, so that’s what I used. The map looked roughly like this: 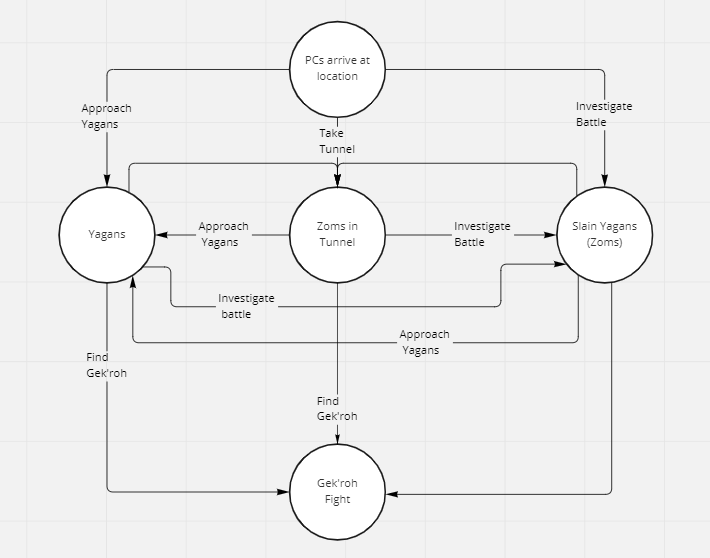 This is somewhat simplified from the original but gets the point across. I needed to ensure it could fit in the time slot and teach Cortex basics. I’m not going to pretend that it’s a platonic ideal of a node chart, but it gets the job done. Basically, each node contains pointers to the other nodes within its layer as well as the next layer. So, for example, if the PCs are looking for a way to get to the building, they might find the tunnel first and decide to go for that. Once they are in the tunnel, they wind up having to deal with some undead but also might find clues that there are Yagans present and/or another tunnel exit. They can investigate each of the three nodes (or not). Doing all three would give them a leg up on the main event, fighting the creature itself.

Applying a quick and dirty beat analysis, I think this looks right.

This is rough since it was never set up with beats, but hopefully, it helps get the point across (there should be a third layer underneath the second row of nodes involving making their way through the building and finding some clues regarding their benefactor). I know some areas can be improved—it was supposed to be a pretty straightforward, linear scenario that did what was advertised on the tin as a playtest/intro. I know the people who played through it said they had a good time, and the pacing seemed to be good.

Hopefully, having a real-world example makes it a little easier to see how beats can fit together in a roleplaying session. 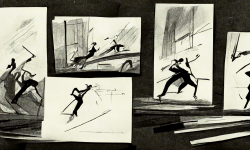