An off-hand remark I made about “high trust” on Twitter a few weeks back got me thinking: where did this “trust” idea come from? How come high trust is a thing that has been a concept in tabletop RPGs for a long time, yet I can’t pinpoint from where exactly? So I dug to find out and still came up somewhat empty-handed.

Many search results for “high trust” or “low trust” seem to be about business, economics, contracts, and that sort of thing. This makes sense but seems like a coincidence and not relevant to RPGs.

In the past, the game designer and writer S. John Ross have used the terms high and low trust, but he seems to use them when discussing scenario design. It’s also notably different than what I had understood. But his blog or the FAQ on his website don’t provide a definition. Moreover, there’s nothing about it on Google Groups archives of rec.games.frp.misc and rec.games.frp.advocacy, where he was active for many years.

Eventually, I did dig up a handful of places where trust gets mentioned.

The first one has this to say, and that’s it:

Others fear that the distributed authority you often see in story games will result in anarchy, where players are free to dominate and abuse one another. But if that happens, well, you’re either playing a bad story game, that fails to keep people from running roughshod over each other, or a game that was intended to be played in a high-trust environment. The latter sort of game will pretty much always tell you up front that that’s what it is.

It seems to be saying that the trust component involves the players trusting one another to avoid making things personal, but it’s hard to tell.

The second link isn’t much more enlightening, but it at least contains something closer to what I’ve always thought of regarding trust: high trust is between the players and the GM.

Now, a more appropriate definition of ‘GM fiat,’ to my mind, is: the GM chooses. In any given situation in a RPG session where there is some doubt to the outcome of an action, or set of actions, the gamemaster chooses what will happen. Ideally, this will be a thoughtful and informed choice on the part of the GM but, regardless, it is his/her choice. No randomizers are involved. The players trust the gamemaster to make a good choice for the game.

That is what a high ‘trust’ rpg is about. I like it.

The last article is the most interesting. While it’s geared toward video games, it reveals some salient points about how I think about trust in a tabletop RPG and provides this nifty trust spectrum: 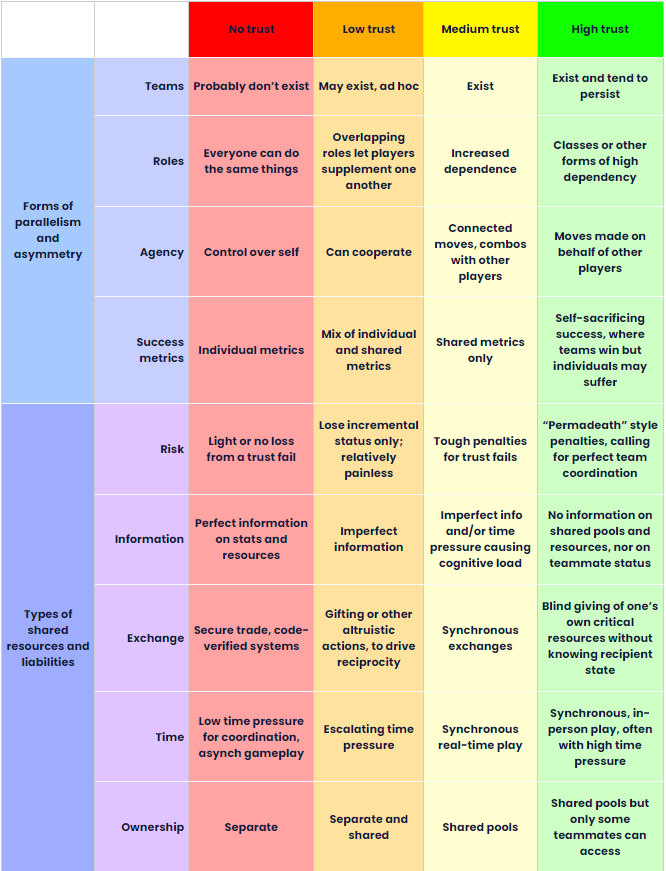 The spectrum shows a pattern of increasing cooperation and shared control as one moves from lower to higher levels of trust. Low-trust games tend to be centered on only what the player can control with little dependency on the other players. High-trust games tend to have more collaboration, shared responsibility, authority, and even role protection. To have teamwork, you have to trust that other players will fulfill their roles within the game and manage and use what resources they have effectively. You also have to be willing to make personally suboptimal choices to advance the team. Of course, this might only directly apply to trad games with heavy wargame components (you know which one I’m talking about). Still, some higher-level corollaries exist, even in games that don’t feature those play elements.

Putting Some Pieces Together

Even though I couldn’t figure out how “trust” wormed its way into my lexicon, seeing the trust spectrum helped me internalize my understanding.

Trust in tabletop RPGs is an informal measure of how much the players and GMs trust one another to engage with the premise and rules of the game collaboratively, in good faith, and fairly. In high-trust games, the players trust that the GM will exercise good faith and thoughtfulness when making decisions. The table doesn’t feel the need to fall back on complex rules to enforce fairness or resolve disputes. Instead, in a high-trust game, the players trust one another to collaborate and make honest attempts to engage with the game.

In a high-trust game, the GM has a lot of authority to make unilateral decisions without necessarily falling back on the rules. This often, but not always, comes with increased player authority to contribute collaboratively. However, even without that authority, players can make suboptimal choices for their characters and trust the GM to not react punitively.

In a low-trust game, there is more reliance on the rules, and the GM is not entrusted with as much authority to use GM fiat. Often the players don’t have as much collaborative authority because of the possibility of a player abusing it. They are responsible for their own character and nothing else, and the GM applies the rules with the expectation it will be done so evenly and consistently.

A good of a high trust game is Blades in the Dark. The player determines which Action they will roll when resolving a situation instead of the GM assigning one. As such, the GM has to trust their players to make reasonable decisions about Actions. The GM has unilateral authority in setting the roll’s position, effect, and consequences. The players must trust that exercising creativity won’t bring down harsh consequences intended to punish that creativity. Finally, everyone has to trust that they can discuss any disputes reasonably and come to an agreement.

Like any bit of game theory like this, games exist on a spectrum instead of a binary and will contain components that might have different trust levels. For example, a generally traditional game might be more on the low trust end of the spectrum but embrace “rulings not rules” in a high trust manner. Similarly, a high-trust game that relies on frequent GM judgment calls and shared player authorship might have a lower-trust strong definition of split responsibilities between GM and players.

So Did I Figure It Out?

Maybe? I better understand what I’ve meant when I say high or low trust. I am still trying to figure out where the concept came from. It’s still a fuzzy concept and might be more applicable to board games or video games over RPGs. Regardless it’s interesting to look at RPGs through the lens of trust between players and GM.